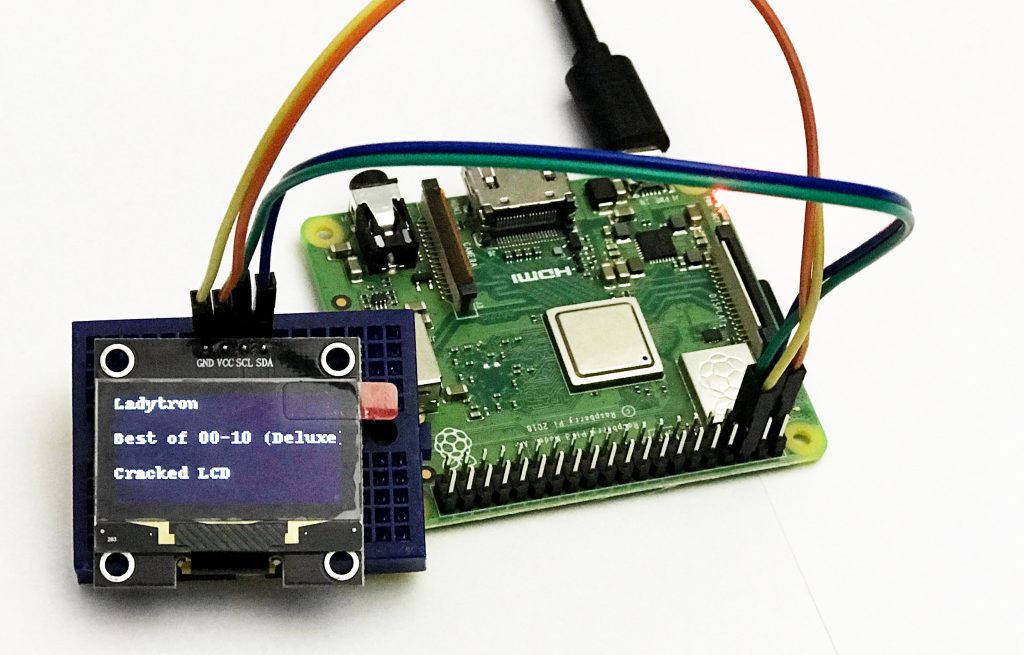 Configuring a Raspberry Pi so you can stream Airplay to it is remarkably simple. But what if you want to see what’s playing right now? The current artist and song information is sent over Airplay, and in this tutorial you’ll learn how to extract it and send it to a display on the Raspberry Pi.

My previous post on configuring Airplay on the Raspberry Pi proved very popular – I’d like the thank everyone for all the positive feedback! If you read it, you may now have a black box that can stream music from an iPhone to your Hifi.

This follow-up tutorial shows you how you can build on that. You’ll learn how to extract the currently playing artist, album and song information from the Airplay stream, decode it and show it in a user-friendly way on a display.

This tutorial assumes you’re already running shairport-sync on a Rapsberry Pi. To find out how to do that, follow the steps in this tutorial.

If you followed the instructions exactly, you will have built shairport-sync with the  --with-metadata option.

The option enabled metadata in the code, but that didn’t really do anything by itself, because by default metadata is disabled in the config file.

You now need to edit the shairport-sync.conf file:-

Now search for metadata entry. It should look like this:-

As you can see, the content is all commented out, which disables everything.

First of all, uncomment it all and change the enabled field to "yes".

Now if you restart the service:-

When you start playing something via Airplay now, the metadata will be sent through a Unix pipe. Pipes allow programs to communicate with each other asynchronously. They’re similar to network sockets, but much easier to use. They also have the advantage of looking just like files.

The pipe_name mentioned in the shairport-sync.conf file above happens to be /tmp/shairport-sync-metadata, so you can dump the contents of the pipe just like a file:-

This should display raw data every time you change track. Because it’s a pipe rather than a regular file, the cat command will not terminate because it doesn’t see and “end of file” indication. It simply waits for more data.

It displays the raw XML data received from the Airplay device which will look something like this:-

Now that proves you’re receiving information from the Airplay client, but it’s not very user friendly.

The artist, album and track names are encoded in base64 format which enables them to be sent safely inside XML. You need to decode the base64 back into Unicode to make it human-readable. You also have to understand the XML schema in use, which involves lots of magic code numbers.

Luckily Mike Brady, developer of the excellent shairport-sync, has also made a decoder available, which is going to make this job very easy indeed.

First, clone the repo into as subdirectory of your home directory:-

Then configure and build it:-

What you have done here is built a program called shairport-sync-metadata-reader. Now you’re ready to decode the metadata.

At this point you might need to need to restart the Airplay link, and to be on the safe said, restart the server too:-

Then if you’re already Airplaying, disconnect from the Raspberry Pi and reconnect. If you don’t do this the metadata might not be decoded properly.

Now check the metadata decodes correctly by sending the output of the pipe into theshairport-sync-metadata-reader  you just built:-

Once you’re reconnected to the Raspberry Pi, start playing again. Skip some tracks to prompt Airplay to send some metadata.

At this point you should see something useful, such as:-

Woohoo! There you have it, Album Name, Artist, Composer, Genre and Title fields are all filled in.

That’s great, but dumping text to a terminal is hardly the best user interface. Time to do something useful with all that lovely data…

There are seemingly endless options for connecting a display to the Raspberry Pi, but this was a weekend project and I was constrained by what I had lying around that would work directly with 3.3V. The answer was a 1.3″ OLED SH1106-based display with an I2C interface. The suppliers change regularly, but you can find similar displays such as a this MakerHawk SSD1327-based version on Amazon

. These are cheap, easy to find online

, and simple to wire up.

Wiring Up the SH1106 Display

This is the easiest part. As a prototype you can do it all using jumper leads, because both the display and the Raspberry Pi have IDC connectors for all the signals you need.

Power everything down and then connect as shown below:-

First off you need to configure I2C support. Enable the I2C interface by turning it on in raspi-config:-

If you’re asked to reboot, do it now.

This is the user-mode I2C interface, I2C-1, that you’ll use to connect to the display. (I2C-0 is reserved for system use these days.)

Check Whether the Display is Present

Ensure the display is wired up as instructed above, and issue the following command:-

This seems unnecessary – you’re not running Windows here! Input Y to continue and if your display is connected up properly you should see the a response like this:-

This signifies that a device with I2C address 78 has been found on the I2C-1 bus. The reason is says 3C is that the lowest bit of the I2C address is actually a read/write bit and the address is in bits 7..1. In some tools and documentation the address is sometimes shifted right by 1 bit to remove the R/W bit. This shift right by one bit is equivalent to division by two.

Your display might have a different address. Whatever, it should be be found by i2cdetect since it scans the entire address range.

Installing a Python Library for the SH1106 Display

Once your I2C device is found it’s time to talk to it!

The simplest way is to install Richard Hull‘s excellent luma.oled package for Python. The github repo contains heaps of examples, but you can install ready-built libraries easily:-

Assuming that goes painlessly, you’re ready to write some code…

For the sake of simplicity, I’ve written all the code in a single file. There are two main parts:-

Create a new file for the code:-

Next, copy the following code into the file.

Before trying to run the code, you need to make the Python program file executable:-

The code is designed to run forever, and it is invoked with an input pipe directly from output of the metadata decoder. The Airplay metadata decoder can be used like this:-

This takes the output of a Unix pipe and filters it through the metadata decoder. Now you need to pipe the output of the decoder into a program to write it to the display.

There are various ways you could construct this on the command line, but for ease of reading I prefer to do it like this:-

This command “reads” correctly, starting with dumping the raw Airplay data from the Unix pipe, sending it into the metadata decoder, and piping the decoded output of that into the display program.

You should now see the current track information displayed on the OLED display.

In the same directory, open a new file called display-metadata:-

And edit it so it contains:-

Note that the full path of the Python script is included: /home/pi/airplay-meta/consume-metadata.py. This is because the script will be called from systemd so all paths should be absolute.

Close this file and give it execute permission:-

Next, copy the script you just created to the /usr/local/bin directory:-

This is now a quick and easy way to launch the metadata display program.

As a sanity check, you can now leave the current working directory and run the script by name only to make sure it’s found by the shell:-

You should see “Ready…” on the OLED screen. Press ctrl-c to cancel.

Running a headless-mode Raspberry Pi is great for embedded devices, but it does have the added overhead that you need to configure your code to start automatically. The modern way to do this is using systemd and luckily it’s not very hard.

In the editor, enter the following lines:-

This defines a new systemd service with the following properties:-

The rest of it is boilerplate you don’t need to worry about.

Now that you’d added a new service, you need to tell systemd to reload its services so it finds it:-

This will complete silently, but it’s hopefully found your now service, so when you start it with:-

you should see the OLED display light up again, and the metadata service should run successfully from now on!

Now enable it at boot time:-

The service should now start automatically on reboot.

Well done for making it this far! I hope this was helpful to you.

Did you do something great with this? I’d love to see your photos and hear your stories. Please send me feedback, either by leaving a comment below or by contacting me directly.